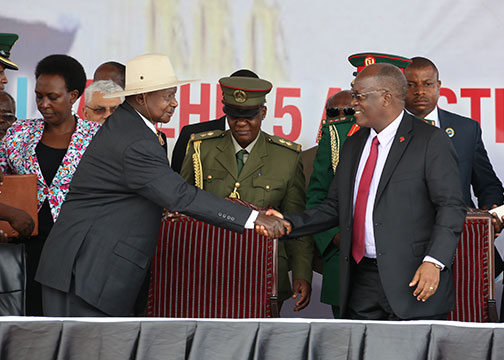 President Yoweri Museveni and his Tanzania counterpart Joseph Pombe Magufuli today commissioned the construction of the 1,445km-long East African crude oil pipe line from Hoima district in Uganda to the Tanzanian port of Tanga. The two leaders used the occasion to underscore the need for fast integration of the East African community so as to ease the joint planning, financing and implementation of major projects that are crucial for the development and transformation of the region.

The heated crude oil pipe line, the longest of its kind in the world, will cost $3.5 billion and will be completed by 2020 making Uganda join the ranks of oil producing countries. The pipeline works will be undertaken by Total E&P, CNOOC and Tullow Oil together with the two governments of Uganda and Tanzania. The pipe line will on completion carry 216,000 barrels of crude oil for export daily.

“On behalf of Ugandans I thank President Magufuli and our Tanzanian brothers for giving us the following concessions on the pipe line. There will be no pay transit tax, no Value Added Tax, no corporate income tax, gave us 20 years depreciation tax holiday, granted us a free corridor where the pipe line passes and promised to buy shares in the pipe line,” President Museveni said.

On his part, President Magufuli thanked President Museveni and his government for trusting Tanzania and choosing the Tanga route for the project despite the other options available. He said with the oil coming to Tanga, Tanzania would now buy crude oil from Uganda instead of incurring high exports of importing from the Arab world, while indicating that Uganda would also find it cost-effective selling to Tanzania.

Dr.  Magufuli added that Tanzania will also gain from the skills and expertise of Ugandan technocrats who have accumulated experience in the extractives sector. He challenged the contractors to ensure they complete the project on time, saying anything short of that would be a big blemish on their profiles and countries of origin.