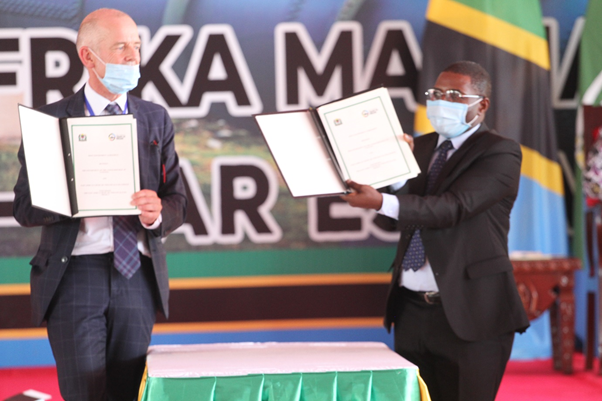 The East African Crude Oil Pipeline (EACOP)1 Project and the Government of the United Republic of Tanzania have today together signed the Host Government Agreement (HGA) on the 11th April and the 20th Mat respectively. This document establishes the legal and commercial framework for EACOP to be financed, constructed and operated.

The signing, witnessed by the President of the United Republic of Tanzania, Samia Suluhu Hassan, the President of the Republic of Uganda, Yoweri Museveni, and the President of Total Exploration and Production Africa Mr. Nicolas Terraz at the State House in Dar es Salaam, Tanzania was also in the presence of representatives of EACOPs shareholders, being Total, Uganda National Oil Company (UNOC), Tanzania Petroleum Development Corporation (TPDC) and China National Offshore Oil Corporation (CNOOC), Other Government officials as well as representatives from the private sector were also present.

This follows the signing of the equivalent Ugandan HGA on 11 April 2021 together with key Project documents (Shareholders Agreement and Transportation and Tariffing Agreement) and therefore formalizes the milestone of each State Party having concluded its respective HGA for the Project and concludes the main EACOP legal and commercial framework.

The HGAs, executed between each State Party and the EACOP Project, are the implementation of Intergovernmental Agreement for the EACOP System which was signed between the United Republic of Tanzania and the Republic of Uganda on the 25th May 2017.

The East African Crude Oil Pipeline (EACOP) Project and the Government of Tanzania shall continue to work together towards a successful implementation of the EACOP Project while observing national laws and international best practice standards.

The East African Crude Oil Pipeline will unlock East Africa’s Potential by attracting investors to explore opportunities in the region. The Project will result to over 60% Increase in Foreign Direct Investment (FDI) in Uganda and Tanzania during the construction phase. Its success will be founded on the positive collaboration and understanding of all stakeholders.

The President of The Republic of Uganda, H.E. Yoweri Kaguta Museveni, whilst attending the Kingfisher…