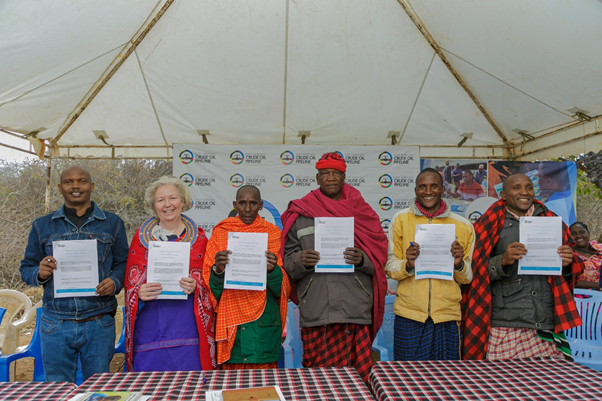 The EACOP project signed on 6th July 2022 a Free Prior and Informed Consent (FPIC) Agreement with the Akie Community of Napilikunya in Manyara region, Tanzania in respect of their cultural and spiritual values. The signing of the FPIC Agreement was the cumulation of several years of engagements with Vulnerable Ethnic Groups Self-identifying as Indigenous Peoples affected by the EACOP Project. The signing event was officiated by the EACOP Tanzania General Manager Wendy Brown and witnessed by the Acting District Administrative Secretary (DAS) of Kiteto district Mr. Fadhili Alexander.

“Today we are making history, I understand this is the very first FPIC Agreement ever in Tanzania, and one of only a handful in Africa. EACOP is very proud to be taking this first step with you the Akie community of Napilikunya” stated Wendy Brown, General Manager of the EACOP Project in Tanzania during the signing ceremony.

Dr. Elifuraha happily expressed “I feel very proud that Tanzania joins a few countries in the region that have implemented FPIC – an emerging international law principle requiring culturally-appropriate engagement with vulnerable communities prior to implementing projects.” He added “I am also profoundly impressed by EACOP’s good faith, transparency and commitment to meaningful engagement that has empowered the Akie community to make informed decisions. This is an incredible precedent for future projects in Africa.”’

EACOP’s many engagements with the respective communities since 2017 and, since December 2019, quarterly engagements with the traditional leaders of these groups has led to greater understanding of the specific Project impacts on each community including understanding the presence of potentially impacted cultural and sacred sites. “Our engagements have been focusing on ensuring the Akie community is well informed to make the right decision’ emphasised EACOP’s Manyara-based Community Relations Coordinator Emil Msisiri.

Commenting on reaching the FPIC milestone, Bariki Lelya a representative from UCRT, highlighted that this is the first time UCRT has worked with a mega project to ensure meaningful engagement with Vulnerable Ethnic Groups Self-Identifying as Indigenous Peoples and advised EACOP to consider the request of the Akie community to protect the new sacred site and assist the community to secure the customary right of occupancy, advice that was further cemented by Saitoti Parmelo a representative of PINGO’s forum, Adam Ole Mwarabu a representative from PAICODEO as well as  representatives of the Akie Community. During the ceremony EACOP committed to this support.